I was Just reading Betanews, and i found this , what do you think?

Facebook has been translated into dozens of foreign languages, but BetaNews found a hate group on the site in Serbian that was completely unmoderated, despite a tremendous user outcry against it.

The group “NO? ?ICA SREBRENICA!!” is a “Just for fun – Fan Club” of fugitive war criminal General Ratko Mladic, who was found guilty of genocide/mass murder in an International Criminal Tribunal in 2004. Mladic commanded the Army of the Srpska Republic in the 1995 Srebrenica Massacre of over 8,000 Muslim men and boys.

The existence of this group caused an uproar among Facebook users in the Balkans, leading a user named Azrudin Pecanin and two others to form a group to get “Noz Zica Srebrenica” removed. Despite having a membership of over 11,000 who were instructed to report the offending group, the hate group remained in place. Even worse, when contacted this afternoon, Facebook had no idea of either group’s existence.

BetaNews contacted Facebook today to discuss the site’s policy on the moderation of foreign language groups. A representative from the social network said, “Facebook supports the free flow of information, and groups provide a forum for discussing important issues. However, Facebook will remove any groups which are violent or threatening.” 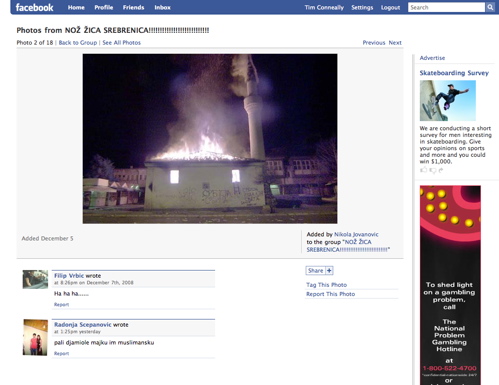 The group’s page said it was made “with the goal of making all normal people see the danger of radical Islam through jokes and fun, to share their opinions without spreading hate on any level.” Included in the group’s hosted imagery, however, was a user-uploaded cell phone photograph of a burning mosque, and the mention of disposing of Muslims in sulfuric acid — a wartime method of rendering human remains untraceable — cut too close to the bone, so to speak.

“Noz Zica Srebrenica” violated Facebook’s terms of use and was removed. But were it not for the looming threat of bad press, there is no telling how long the site would have remained.