I downloaded the game HellGate-London and played it for the last 3-4 days and here is my review
Official Site:
Hellgatelondon.com

The game is about some warrior in some kind of zombie/alien invasion future time. The movie at the beginning show you interesting story, but the game is little related to it, at least where i am at now. You start by choosing your character general figure (hair, color, face, height…etc) and the class. I can’t remember all the classes, but there is engineer (my choice) blademaster, marksman, evoker(magician), summoner, guardian and couple more i think. Each class got their own special abilities and special armors and weapons to wield.

The game have some rpg taste to it. You kill creeps and zombies and collect what they drop then you go to stations (bases) and talk to people to acquire quests and tasks (which basically kill some number of creeps and get their droppings). I didn’t have the chance to play it online, so i don’t know how that is like. but i played single player, there is always a main task which is usually go somewhere and talk to someone, and you can pick up secondary tasks along the way which give in return some experience and money to buy better items.

The experience you gain make you level up and when you level up you can increase some characteristics, like accuracy, stamina, power. and you get a skill point which is very similar to the skill system in WOW. of course this is different from class to class.

The game itself is very simple. it reminds me of fate and Diablo but attacking in this game is actually depending on the user skill rather than the character skill like almost every RPG game. You actually have to aim and shoot or slash instead of just click “attack” button.

The game has very nice graphics, i have AMD64 X2 5600+ processor with ATI Radeon 9950/X1050 256MB. The game works smoothly on my computer, but i can’t use maximum settings or the game will lag, i have to settle with medium graphics which is still very impressive.

You can play the game in first person or third person view which is great to me since i hate first person.

I would recommend this game for people who enjoy RPG’s game with some shooting and fighting skills. 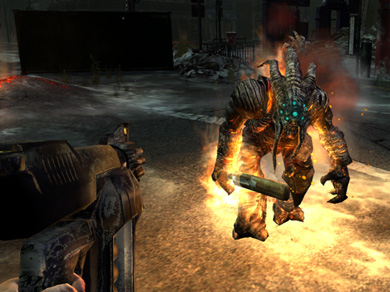